The Best RV Camping in Georgia

From the Chattahoochee National Forest grasping the southernmost peaks of the Appalachian Mountains to the luxurious coastal small towns that provide an entirely different experience, there’s so much to explore in Georgia.

So you love it when the price tag on your forested mountain vista reads nothing but zeros, do you? We’re not going to lie to you, Georgia is too formal a lady to offer her campgrounds up for free…at least not the free boondocking one might be used to in more western states. Good news is still on the horizon, though, particularly if you’re the type of RVer who enjoys the more natural settings a state has to offer but doesn’t mind a few modern conveniences. Georgia’s state parks have a program which goes by the straightforward name of “RV Club,” and it means free camping one out of ten nights.

If absolutely free is more of what you had in mind, the state does have a handful of free places to camp, mostly Cracker Barrels and a county park.

Since free camping is more or less going to be limited to state parks in the Peach State, let’s begin our slow plod through this beautiful and historic corner of our nation via those types of campgrounds. Specifically, the top ten state parks in Georgia as determined by Campendium’s reviewers.

Should you choose to spend a night in each of them, well, the last one’s on Georgia.

Not terribly far from antebellum Savannah, tucked into a bend in the Ogeechee River, this Georgia State Park is focused more on the history of the state than the natural resources and stands out among the others in this list for that very reason. The star of the show here are the remaining Confederate “earthwork fortifications,” a type of military defense where man literally reshapes the landscape by creating walls from dirt and stone.

The campground at Fort McAllister is praised for its tendency to be quiet and peaceful, despite being only forty minutes or so from all that Savannah has to offer.

Guided tours on horseback and the arc of an angler’s line dancing over the waters fill the days at F.D. Roosevelt State Park, named for the president who helped build it, thanks to his efforts with the Civilian Conservation Corps.

As with many of the state’s campgrounds, one can expect spacious wooded sites when camping at F.D. Roosevelt.

Probably the state’s most adventurous park, Cloudland lives up to its magical name for the plethora of mountain bikers, hikers and nearly every other type of adventure seeker who finds their way into this maze of caves, canyons and creature-laden forest high in the mountains of the northwest corner of the state.

RVers who wish to camp at Cloudland should be aware that the road to the campground is rather daunting.

One of Georgia’s state parks nestled into the Blue Ridge Mountain, if reservations say anything about the popularity of this park, then it’s unlikely to disappoint – you’ll want to book early if you plan to snag a spot here.

Once you’re setup and your campsite is secured, though, expect wildflowers and waterfalls (particularly in the Spring) here at the highest state park in the Peach State.

Easily one of the more dramatic geological displays the Eastern United States has to offer, campers eager to test their might can apply for one of 100 permits issued daily to hike the 1,000 miles to the gorge’s floor (and another 1000 back, mind you), or just bring a pair of binoculars and look for peregrine falcons from the decidedly easier trails along Tallulah’s rim.

While the campground at Tallulah State Park comes with a little nearby traffic noise, it also offers the perfect combination of proximity to nature and the convenience of nearby civilization.

The Blood Mountain. Brasstown Bald. Chattahoochee. Neel Gap. One of Georgia’s oldest state parks, Vogel sounds like the perfect setting for an epic battle between warring southern families, or perhaps a tale of some mountaineer’s grit as he traverses the Blue Ridge Mountains in search of animal pelts and a life lived freely.

These days, you can expect brisk evenings in the summer and an auburn palette across the forest come autumn and activities ranging from kayaking to mini-golf, all of which is only a couple of hours from Great Smoky Mountains National Park.

Given that Vogel State Park’s campground is one of the oldest in the state, one might be convinced to forgive it for being a bit outdated.

Another one of Georgia’s southern parks boasting its diversity of ecologies, Stephen C. Foster is a world away from the cool evening temperatures of the mountains or the slow breeze of the state’s northern coast. Instead, picture yet more alligators and a better than average chance of mosquitos.

Still, travelers who make the trek to this state park love it for the wildlife, weather (particularly in the fall) and cleanliness of the campground’s amenities.

Campers note that you’ll want to bring everything you’ll need to the campground at Stephen C. Foster, as it’s rather far from anything.

“Was that a yellow bellied slider or a gopher tortoise? No, I think it was an alligator!”

These are the kinds of things you may here kids participating in Georgia State Parks’ Junior Ranger Program, particularly here in Reed Bingham, where you’re only an hour or less from subtropical Florida’s border.

Back your RV into a waterfront view accompanied by a wooden deck overlooking Lake Allatoona and enjoy your tall, cool glass of sweet tea. Some forty minutes north of Atlanta, this state park is your gateway to the mountains of Northern Georgia (or the Southern Appalachians, however your bird’s eye prefers its view).

What was once an iron ore mine is now your personal playground for everything from lake side relaxation at Red Top Mountain’s campground to deep forest hiking.

A mere thirty minutes from Savannah, Skidaway Island is a prime example of the state’s coastal environment. Picture your rig nestled beneath live oaks, their massive limbs reaching out like fingers dangling yo-yos made of Spanish moss, a surreal environment and your first introduction to the otherworldly forests and climes in general of the extreme Southeast of the US.

The perfect location to call home while exploring Savannah’s cultural wealth or the similar trove of treasure found in nearby Wassaw National Wildlife Refuge’s exotic birds–from wood storks to bald eagles–though note you’ll need a boat to enjoy the latter.

Massive sites with plenty of trees to separate you from your neighbors is one of the reasons Skidaway Island State Park’s campground consistently gets 5-star reviews.

Georgia is home to two national forests, Chattahoochee and Oconee, and the two combined (particularly within Chattahoochee), offer dozens of opportunities for RV camping.

Note that while some of the national forest campgrounds, such as the one at Lake Sinclair, offer full hookups, many are more suited to camping in vans and smaller truck campers only.

For those of you who’d prefer full hookups and the convenience and community often found at private RV parks, have no fear! The Peach State houses over 150 RV parks, from the remote found in the state’s northern mountains and southern swamps to parks near big cities like Atlanta and Savannah.

We’ve listed the top ten (plus two extra for good measure!) according to reviews on Campendium, enjoy!

Where you and your RV will end up is going to be based around your tastes. If you want to explore the history of the state’s cities, private RV parks might be your best starting point. Should you want to get lost in the wilderness, the Peach State’s national forests are ripe for exploration. If you’re just looking to dip your toes into the sea of options available in the state, we’d highly recommend starting with the state parks. 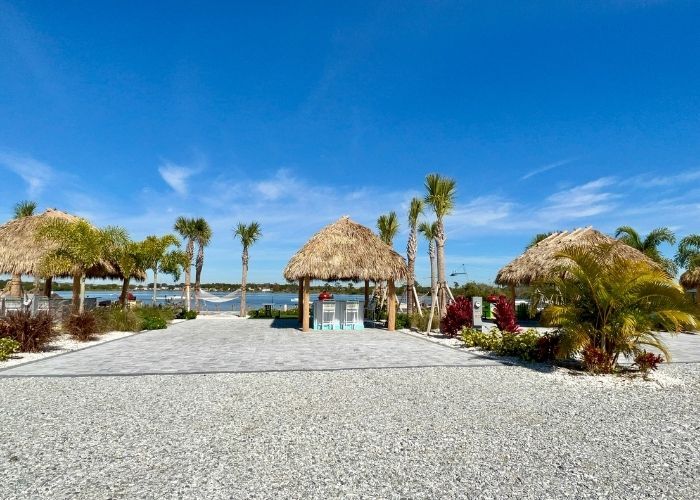