Once upon a time I convinced this lovely mountain girl to live in an old VW Bus with me and travel around. Via various pursuits through the wilderness, we ended up with a few roustabouts tagging along, and while all of them have proven themselves venerable road warriors, this fellow pictured–who goes by the name of Winter–is my main man when it comes to all things birding, canoeing, bike riding, making campfires and generally being outdoors.

Here are some of our collectively favorite camping gear, heavily moderated by myself as he just chose five of his favorite Lego creations. “Legos are a major part of camping, Daddo,” he insists, but then we decided we might focus on stuff that is specifically and only for the great outdoors. We absolutely crush camping chairs. Living on the road, ours get used every single day, all day long. As long as there’s a buttcheek in their presence, someone will be sitting in them. If mom is sitting in one, a kid or two will be jumping on them. The average camping chair from a gas station or Walmart or something has a half-life of 13 seconds in our family, and we’ve even burned through expensive chairs from REI. These GCI Outdoor Camping Chairs have been around for a couple of years now and though they’re covered in dirt and burn marks left behind when the fire gets spitty, they’re showing only mild signs of wear. We may even do something crazy like have them reupholstered, they’re so sturdy. Light, it’s what separates us camping humans from soul-sucking vampires bent on a never-ending nightfall. It’s also useful for when you want to see. We’ve had this little gadget–the Goal Zero Lighthouse–for years. It charges up relatively quickly via USB even via solar, puts out a ton of light or a half-ton of directional light, and you can plug any other USB device into it as well, so it doesn’t take up an entire USB outlet for those of us with precious few in our vanlifing adventures after dusk. When my grandfather was a kid, no doubt his grandfather complained to the tune of, “They just don’t make ‘em like they used to…” I’ve proudly followed in his yesteryear-worshipping bootprints and loathe the multitude of poop emojis sold under the guise of outdoor gear. If it can’t be left in the rain, snow and dragged around in the mud or across the desert by a 4-year-old, it’s not worthy of being sold to those of us who live in these conditions regularly. This little hammock by Grand Trunk is five years old and I’m still confident enough in its every stitch to hang it over a cliff while wearing my skimpiest top trying to get that just right Instagram shot that will catapult me to useless square stardom.

“It makes a great swing,” Winter would like to add, “at least when my brothers aren’t around to totally hog it all up.” 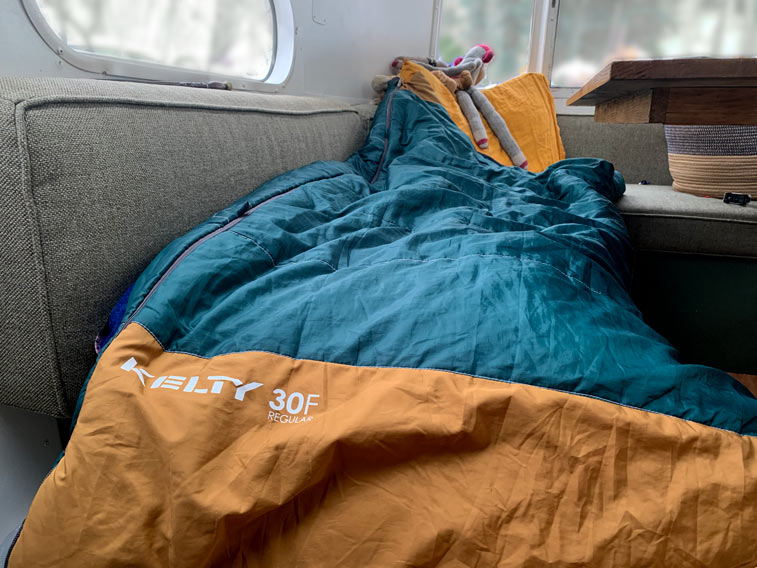 Over the years, we’ve lived in a VW Bus, an Airstream, a regular old van…and sometimes we just take a tent up into the woods. In every situation, we’ve had nice blankets and thrift store blankets. They add a modicum of decor reminiscent of a time when my Great Aunty Lola may have lived in a van through the Great Depression. They don’t really work though since our children can kick them off relatively easily.

We also enjoy skirting the seasons, where you can enjoy Oregon into November without the crowds, or do one last road trip through North Dakota while it’s just you and a herd of bison left to explore Teddy Roosevelt National Park. To meet both the needs of our children’s nightly warmth and ensuring they won’t just kick them down onto the floor, leaving their little toes to become piggy pops, we like sleeping bags, and these ones have held up and treated us right for the past couple of years. On a pricier note, we live in solar. We also like cold stuff to eat and drink, but refrigerators take up most of our power. We don’t want one of those 12v fridges that only open from the top, because sure, they save power, but like any cooler-shaped device, they get all icky gross at the bottom and you have to dig through them like the ancient van dwelling cave people of old once did. Given that we spend most of our days outside climbing mountains and paddling rivers and working on engines and generally living a modicum of discomfort below what the average human experiences these days when it comes to reaching into the fridge for a block of cheese, I want to know that my hand will not come back out covered in raspberry goo. After many long months of research, we decided on this Engel Fridge. It draws less than 3amps and we’ve managed to keep it going with a single AGM battery and 100 watts of solar. Maybe they’re super trendy, but we rely on these little metal canisters from Hydro Flask like a shotgun relies on its owner just being able to point it in a general direction. We have one for each of us and a bigger one that is just for ice. Day 1, we each have enough cold, cold water to last us all. Day 2, there’s some ice in the bottom leftover from yesterday, just add more water. By day 3 you can get into the big ice-only one, now partially water itself, and by day 4 you have an excuse to go somewhere and get more ice and water. Plus, where else are you going to put the umpteen stickers you come home from the brewery with?

I use the little one for coffee, too, at least when I want my coffee to continue scalding my lips off even a couple of hours after I’ve forgotten to drink it all. Speaking of coffee, I have a confession to make. As much as living on the road can make you feel like an outsider already, a lone wolf howling at the full moon on a biker t-shirt in Sturgis, I went and made my leave even more chastisable by developing an addiction to drinking coffee cold. At first, it was just a flirtation, something to pass away the warm summer mornings as we jostled our way around Mexico in a beat-up VW Bus. Then we started living in our Airstream again, through a freezing cold winter, when I realized that I just couldn’t give it up. Warmth be hot damned, I was going to drink cold brew coffee if it froze my nose off.

After considerable research and multiple attempts, I found the Rumble Jar, which requires nothing but water, coffee and a shake around noon. By the next morning, it’s just me and a tall cold cup of saving $5 at the local nitro cold brew tap. We brew up a fire more nights than we don’t. Unlike television, there are no commercials and you always know that the content of a good campfire will be a warm, family-friendly affair. We’ve gone through many a cheap wooden axe from wherever we ended up finding one when the previous model broke. One year, I went through two axes in under a month, the heads loosening or snapping off altogether. So, we set out to find the longest lasting, most reliable axe we could.

That axe is made by Fiskers. We got the hatchet version to go with it, as well, for when we want to split up one bundle of wood into a much longer night’s worth of kindling. For years we got by with cheap inverters that plugged into cigarette lighters, the type you’ll find at a Love’s gas station or Advance Auto. I don’t know why. On one hand, I might be a cheapskate. On the other, I don’t want to work anyway. Then I burned up a year old Macbook Pro, just out of warranty, when the power going in apparently was too much for the old guy. This led me to look into the inverter setup further, and Renogy’s 700W offering has absolutely changed our life. It was so easy to hookup, and now I’ve had to invent entirely new excuses to not work on a Wednesday afternoon. I love birds. They’re pretty, and they’re apparently pre-cleared by the TSA as I never see them in the security line at Phoenix Sky Harbor. That said, I enjoy looking at them, and checking off boxes as to those which I’ve seen and clearly identified. I highly recommend US 41 from Miami to Naples, Florida should you want to experience flocks of strangely shaped winged creatures like you’ll see nowhere else in this nation.

To that end, I’ve owned a sub-$100 pair of binoculars which I picked up one year in Yosemite. I might as well have been looking through a cardboard tube. Last year, my beautiful wife got me these Nikon ProStaffs. For some reason, Amazon sent the 3s version. I tried them out. Then asked if we could get the ones we actually ordered, those being the 7s variety. The difference is astounding and I now waste most of my downtime looking at distant mountains, hoping to catch a couple of bighorns ramming one another or an eagle reciting the Pledge of Allegiance.

Sharing your *Favorite Camping Gear* with the Campendium Community is a great way to help the site earn affiliate revenue while helping your fellow campers learn about great gear. If you’d like to contribute, please email photos with links to the product details on Amazon, along with a couple sentences about each item to info@campendium.com. Please include any blog or social media accounts that we can link to. Thanks in advance! 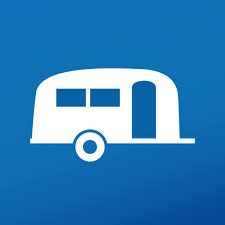