In recent years, we’ve noticed a growing trend of state parks implementing different fee structures and reservation policies for resident and non-resident campers. While these types of regulations may be implemented differently in each state, they’re generally designed to allow residents the chance to enjoy their state parks at a lower cost than out-of-staters.

This is great news if you’re a resident and less-great if you’re not. But while it can sting to pay extra as a non-resident, state park campgrounds still offer some of the best value you’ll find on the road, especially if you love camping in nature.

Here are the states where you should expect to pay a bit more as an out-of-state visitor. And for a full list of state park campground reservation policies in all 50 states, visit Campendium’s Guide to State Park Camping Reservations.

States That Have Additional Charges for Out-of-State Campers

Non-resident campers in a Connecticut state park can expect to pay $5 to $15 more per night for campsites and cabin rentals.

Camping in one of Delaware’s five state parks will cost visitors $5 to $10 more than residents in the spring, fall, and summer seasons. In the winter, no additional fee is charged to out-of-staters.

Non-resident visitors to Hawaii’s state parks can anticipate paying $5 to $30 more per night to stay in a state park campsite or cabin.

Idaho recently implemented a fee increase for out-of-state campers at its busiest state parks, including Farragut, Henrys Lake, Ponderosa, Priest Lake, and Round Lake. At these parks, non-residents will pay double what residents pay, with nightly rates starting at $48 for a basic campsite.

Maine state parks charge an extra $10 per night per campsite for out-of-state visitors.

Though Montana’s state park camping fees are higher for out-of-staters, the state offers a Nonresident Entrance Pass that allows for free park entrance and resident camping rates. The 12-month pass costs $50 per vehicle, and a 7-day pass costs $35 per vehicle.

Non-residents will pay $5 more per night to camp at Nevada state parks.

New Mexico’s camping fees on a per-night basis are the same for residents and non-residents; however, its popular Annual Camping Permit is less expensive for residents.

Non-resident RV campers to Oregon’s state parks now pay 25 percent more per night than residents. The increase does not apply to tent campsites or cabins.

Camping at a state park in Rhode Island costs significantly more for out-of-state visitors than for residents. Non-residents can anticipate paying at least double the resident rate.

Vermont charges an additional $2 per night for out-of-state campers in its state parks.

Out-of-state campers in Virginia’s state parks can expect to pay an additional $5 per night for campsites (more for group sites).

Washington doesn’t charge a higher campsite rate for out-of-state visitors; however, it adds a $5 fee to non-resident reservations. This is in addition to the regular reservation fee of $8 for reservations made online and $10 for those made over the phone.

While camping rates for residents and nonresidents are the same, to enter a state park or forest campers must have a Wisconsin State Park System vehicle admission sticker. Out-of-state visitors can expect to pay $3 more for daily stickers and $10 extra for the annual admission sticker.

The base rate for campgrounds in Wyoming is $10 for residents and $18 for non-residents, plus a day-use fee and lodging tax.

Which states have free state parks?

States that offer free day-use entry to all state parks include Illinois, Iowa (with the exception of two locations), Missouri, Ohio, Pennsylvania, and Tennessee.

How do you get a state park pass?

Do senior citizens get into state parks for free?

Whether you’re visiting for the day or staying for a week, state parks offer the opportunity to recreate and relax in some of the most beautiful natural areas in the U.S. Ready to start planning your trip? 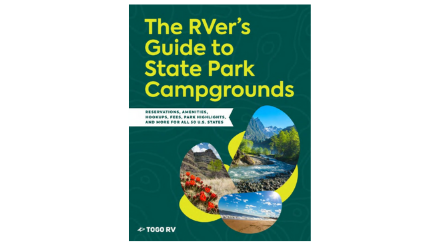 Check out the RVer’s Guide to State Park Campgrounds