Where to RV Camp at 10 U.S. National Monuments

Here are 10 national monuments in the U.S. worth planning a trip around, along with RV campground recommendations.

If you’re a history buff and RVer, you probably have a handful of national monuments on your travel bucket list. National monuments are a great way to get outside and learn about U.S. history, as they must contain some form of cultural, historical, or scientific significance. While national parks are protected due to their inspirational, educational, or recreational value, national monuments serve to remind visitors of historical events and scientific discoveries.

The National Park Service (NPS) can manage both national monuments and parks, but monuments can also be managed by the Bureau of Land Management (BLM), U.S. Fish and Wildlife Service, or the U.S. Forest Service.

Here are 10 national monuments worth planning a trip to with recommended RV campgrounds nearby.

The oldest masonry fort in the continental U.S., Castillo de San Marcos, was built in the late 1600s, more than 100 years after the Spanish founded the city now called St. Augustine. Rich in history, the fort was constructed after attacks by buccaneers and pirates. Built in the shape of a star, the fort is made up of coquina stone, which are shells bonded together to form a sedimentary rock.

After 205 years, the U.S. took the fort off active duty and it became a national monument in 1924. To visitors, the fort represents the tumultuous history of the U.S.: Colonial rule, piracy, slavery, the Civil War, and Native imprisonment have all touched its walls. Its beautiful location in St. Augustine only adds to the moving experience of visiting this national monument.

While there’s a difference between national monuments and memorials, they can be grouped together in Washington, D.C., due to their shared location on the National Mall The area’s landmarks include the Lincoln Memorial, Martin Luther King, Jr. Memorial, Washington Monument, Thomas Jefferson Memorial, World War Memorials, Korean War Memorial, and Vietnam Veterans Memorial.

The National Mall and Memorial Parks make up more than 1,000 acres of parkland within the nation’s capital. They honor and represent significant moments and individuals within U.S. history. While a trip to D.C. might not be a typical camping experience, there are campgrounds to be found in the surrounding area.

Established on September 24, 1906, Devils Tower was the first national monument to be designated in the U.S. It also goes by the names of Bear’s House and Bear Lodge. Due to its sacredness to the Northern Plain Native Americans, efforts have been made (unsuccessfully) in recent years to change its name. Located within the small mountain range of the Black Hills in Eastern Wyoming, the tower sits near the South Dakota border.

With distinct hexagonal columns at 1,267 feet in elevation, the tower is a popular climbing destination. Certain climbing routes are temporarily closed in the spring and summer months to protect falcon nesting sites. Additionally, there’s a voluntary June climbing closure to observe and balance the Native cultural and ceremonial values. Because of its designation as a national monument, historical and cultural significance take priority over recreational activities such as climbing.

Dubbed a “Wonderland of Rocks,” the Chiricahua National Monument is located in Southeast Arizona. The hoodoos and balancing rocks are eroded remnants of a volcanic eruption 27 million years ago.

Related All the Best RV Camping in Arizona National Forests

Visitors will want to keep a few things in mind when planning a visit to this national monument. The Faraway Ranch Historic House is currently undergoing restoration efforts. Check the website to see its current status if you’re looking to tour the ranch. Vehicles longer than 24 feet are not permitted past the visitor center on Bonita Canyon Drive. Vehicles up to 29 feet are still allowed to stay at the campground but can’t go any further. Monsoon season runs from June 15 to September 30. If visiting during this time, know that flash floods come quickly and can be dangerous.

On the ancient trail through Northwestern New Mexico, El Morro is also known as the A’ts’ina in Zuni and Inscription Rock by Anglo-American settlers. El Morro was a natural resting place for travelers because of its water source at the base of a sandstone bluff. The oldest inscription on the rock was made in 1605 by Juan de Oñate, the first Spanish governor of Santa Fe, New Mexico. There are nearby petroglyphs by Ancestral Puebloans as well. In 1906, it became a national monument and U.S. federal law prohibited further carvings on the cliffs.

Related The Best Campgrounds to Experience a Dark Sky Park

On the western bank of the Animas River in Aztec, New Mexico, the Aztec Ruins National Monument is a series of preserved structures constructed by Ancestral Puebloans—not the Aztecs. Monument visitors can visit a 900-year-old Ancestral Pueblo Great House with more than 400 masonry rooms and a restored Great Kiva.

An example of how a national monument can also be a preserve, Oregon Caves National Monument and Preserve is a 4,554-acre park located in the Siskiyou Mountains along the southwestern border of Oregon. Most caves are formed in limestone or dolomite, but the Oregon Caves National Monument is unique in that it’s formed in marble. Fossils found within the monument include a 50,000-year-old grizzly bear and a 30,000-year-old jaguar.

The monument offers cave tours 5 days per week, Thursday through Monday, from 10 a.m. to 4 p.m. (Cave tours are closed on Tuesdays and Wednesdays.) Tickets are available for purchase at the Illinois Valley Visitor Center in Cave Junction. Buy tickets before driving the 45-minute, one-way road into the park and note that tickets tend to sell out early in the day.

8. Craters of the Moon National Monument and Preserve, Idaho

Located in south-central Idaho, Craters of the Moon National Monument and Preserve comprises three major lava fields and thousands of acres of sagebrush grasslands. Accessible from the monument’s 7-mile Loop Drive, visitors can see a series of fissure vents, cinder cones, rafted blocks, lava flows, and spatter cones that transport them to another world. The monument’s handful of hikes and trails teach visitors about the different volcanic and lava structures.

Dewdrop Cave, Boy Scout Cave, Beauty Cave, and Indian Tunnel are explorable, yet flashlights are needed, head protection is suggested, and entering the caves requires a free permit. In the winter, skiing is allowed on the Loop Drive once it’s closed in late November, making this a year-round destination.

Related Why You Should Visit Grand Staircase-Escalante National Monument

The monument spans five life zones, from desert to coniferous forest. Many dinosaur fossils were excavated within Grand Staircase-Escalante, including a few new species. There are a handful of BLM camping sites within the monument and more camping options in the nearby town of Kanab, Utah.

Both a national monument and a UNESCO biosphere reserve, Organ Pipe Cactus National Monument is the only place in the U.S. where organ pipe and senita cacti grow wild. The Sonoran Desert monument backs right up to the U.S.-Mexican border.

The monument was closed for more than a decade due to human and drug trafficking activity and border barrier updates. It reopened in 2014 with new surveillance towers and other security measures. Undoubtedly, the monument gets overshadowed by its political location; nevertheless, visitors can attest to the splendor of the desert landscape and the unique camping experience at the national monument’s campground.

Kendra is a freelance writer and half of one y one, a nomadic creative content agency she co-founded with her partner, Tyler Way. The pair live and work on the road full-time in their Airstream with their two cats, Sunny and Luna. She enjoys vegetarian camp cooking and loves to prepare anything Mexican.

Where to Camp When Visiting Petrified Forest National Park 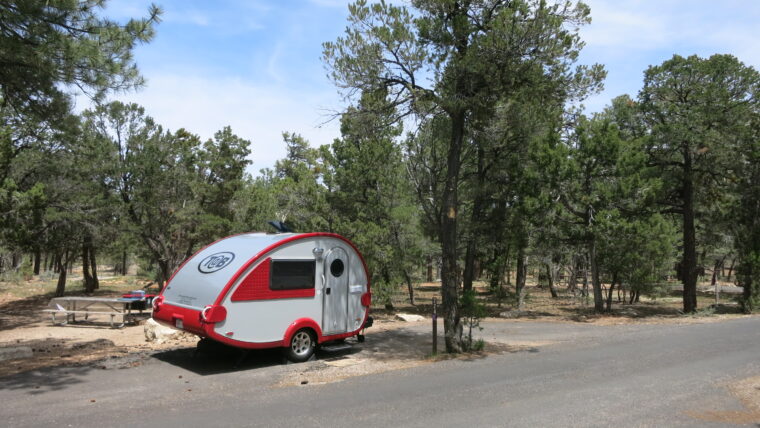 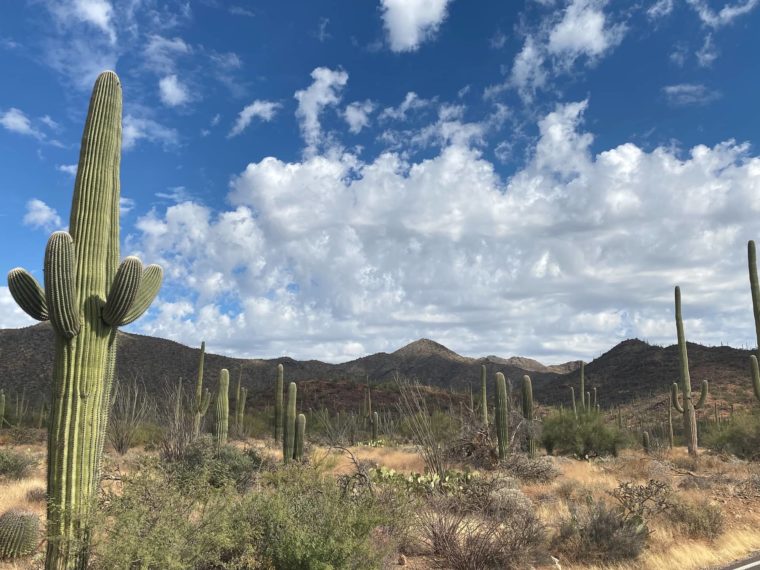 Where to Camp When Visiting Saguaro National Park by RV