A few years ago, I had a camping trip planned to Sequoia National Forest in California for Labor Day weekend. That Friday morning, as we were getting ready to start the 5-hour drive north from San Diego, it became apparent: Smoke from the Pier Fire, which was quickly spreading in the area at the time, was getting so bad that sticking to our planned route would be both hazardous and irresponsible. Camping was out of the question. Last minute, we pivoted and headed to Big Bear Lake instead.

For those of us who live in the western U.S. and enjoy camping and the great outdoors, stories like this are countless. “Fire season” is a climate concept as ubiquitous in California as June gloom and Karl the Fog. And by all accounts, the fires are getting more frequent, widespread, and severe each year.

It’s not limited to the Golden State, either. As temperatures rise and drought conditions worsen, wildfires are popping up all over the West—from Oregon to New Mexico.

As campers, what can we do to stay safe and travel responsibly during fire season? The first thing is fairly obvious: Avoid traveling to areas with active wildfires. For Campendium users looking to plan their next camping trip, this just became a lot easier. Last month, we launched an addition to our iOS app that couldn’t have come at a better time: The Smoke Map feature allows campers to check for wildfire smoke conditions in the areas they’re planning to travel to in real time.

In a 2021 report by Resources for the Future, researchers found that 124,000 camper-days per year were within 12 miles of an active wildfire. “Smoke can have serious impacts on people’s health and their ability to enjoy the beautiful places they come to visit,” said Matthew Wibbenmeyer, one of the report’s co-authors.

When planning your next camping trip, use the Smoke Map overlay in the Campendium app to locate any areas to avoid—and make sure you keep monitoring as the trip gets closer, as conditions can change quickly.

Then, do your part to prevent further wildfires by being a responsible camper. As much as we all love a good campfire, it’s important to be aware of and abide by local campfire restrictions. Even in areas where campfires are allowed, you should never leave flames unattended. You might also want to consider investing in a portable propane fire pit, which are typically allowed on public lands even during Stage 1 and 2 fire restrictions.

And finally, as I learned from my Labor Day trip a few years ago: If you enjoy camping in fire-prone areas, make sure to always have a plan B. (Don’t worry, Campendium can help with that too.)

The Smoke Map feature is available in the Campendium iOS app to all Roadpass Pro members. 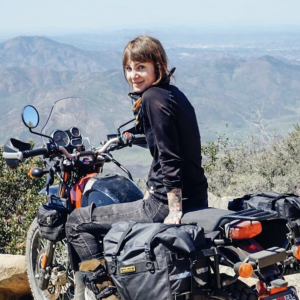 Sanna Boman is the editor in chief at Roadpass Digital, which includes Campendium, Roadtrippers, Togo RV, and RVillage. She lives in San Diego, California.