On June 9, 2015, the couple left Valencia, California, where they’d already been living in their RV for a few weeks. Though both are retired, they were only married a relatively short time before deciding to hit the road together.

“Yes,” Jodee tells us from Steamboat Rock State Park in Electric City, Washington, “we got married and were already making plans to travel full-time.” She’d known Bill since the ’70s though, when they were high school sweethearts. Their lives went separate ways only to flow back together forty years or so later.

“My dad was a part time RVer,” Jodee recounts, “who lived in Quartzsite, Arizona. I got the bug from hearing about his travels and his meetings with old friends along the way. When Bill and I got married I told him what I wanted to do in retirement and he was in!” Two years later they were ready to make the leap.

If you’re thinking of getting another job because you’re bored, you’re doing it wrong.

“With that history we knew we’d both enjoy the travel and playing in the Jeep,” they did their share of off-roading as kids growing up in Desert Center, California, now a ghost town out in the desert. “We were both ready to retire within a couple years and didn’t want to hang out at the same place every day. We also took a few road trips and knew we’d travel well together.” Jodee says they never fought, which reassured them that they could occupy an RV together, and that hasn’t changed living on the road. “One of the things we find that our full-time friends have in common is good marriages between people who really like each other.”

In the four years since they initially hit the road, they’ve traveled from California to New England, the Pacific Northwest to Texas and much of the country in-between. Thanks to the plethora of blogs about RVing that pepper the Internet these days, Jodee felt prepared going in, and didn’t find much about their new way of life surprising, despite having limited RVing experience beforehand.

“We had both traveled for work,” she recalls, “and taken our families on the occasional camping trips. I had my dad’s RV for a short time, but only took it on one short trip. Bill never had an RV. So we were really newbies when we bought the Tuscany.”

Still, they don’t have any regrets. “Don’t miss a thing we got rid of,” she continues, “Don’t wish we were doing something else. We do miss our grandkids a lot, and that is the only hard part of this life.” Modern technology lets them keep in touch with their three grandsons (and a granddaughter due before Christmas). Their children come to meet them on the road, occasionally, or they return to Valencia where most of them still live.

After two years of research, the only real surprise Jodee discovered about living on the road was what it would do to their social life.

“We have twice as many friends now,” she exclaims, “and are always making new ones. We’ve met up with ninety-four people we went to high school with and rekindled many old friendships. Seeing people in different locations around the country is not something we thought we’d ever do. Some we’ve seen in 7 states!”

They also have the constant company of Tessa, an 8-year old soft-coated wheaten terrier.

“She’s my service dog,” Jodee reveals, “which makes traveling with her easier and necessary. At 38 pounds and non-shedding, she’s just right.” They tend to stay in private RV parks or the occasional state park, and use Campendium regularly to figure out where their next ideal spot will be.

“Our life style is less camping and more visiting fun and beautiful places. We enjoy the comfort of our home and rarely have a campfire or eat at a picnic table. We spend most of our time out in the Jeep exploring rather than sitting in our space,” one reason they find the size of their RV to be rather irrelevant.

Doing anything else seems like a waste of precious time.

“I find parks based on our route, being less than 200 miles from our previous stop.” She uses Campendium to find everywhere they go, seeking out full-hookups and places with good recommendations from her fellow travelers.

“I’m on the site every few days,” she says, referring again to Campendium, “and it’s the only place I go to find where to stay.” She enjoys leaving reviews herself (having written over 200 to date), and adding new parks if they haven’t been listed yet, “It seems like a small effort to update a site that is such a big part of making my planning easier.”

While they prefer a particular type of RV park for their basecamp, as to where in the country they travel, they’re open to exploring all of the variety the United States has to offer.

“Death Valley and New York City have the same draw,” she says, “I enjoy the big cities more than Bill does, but we both enjoy seeing the amazing diversity of locations throughout the country. Oregon and Arizona are our favorite states and we have returned several times. Louisiana and New Mexico have amazing food and culture. The history of the east coast and deep south is amazing, but the humidity is brutal for us ‘dry heat’ folks!” Both of them love geological sites, sharing a love for fossils. “Big names like Capitol Reef in Utah as well as small ones like Thermopolis, Wyoming, make us happy. Getting out in the Jeep where other people don’t go is our favorite.” As they begin their fifth year of full-time RVing, they’re considering a home base in Southeastern Arizona for the winter months, but otherwise have no plans to stop traveling in their Tuscany and at the same time a few words to anyone considering the lifestyle.

“Do it,” she says with a smile, “If you’re thinking of getting another job because you’re bored, you’re doing it wrong.”

“There is so much to see and do that an RV will take you to while allowing you to sleep in your own bed and cook in your own kitchen, that doing anything else seems like a waste of precious time.”

She emphasizes that the experiences they’ve gained are worth infinitely more than the belongings they had to give up to live in an RV.

“It always surprises me when we get together with our non-traveling retired friends and in five minutes they’re done catching us up on what they’ve been doing for a year! We could talk about all we’ve done for hours!”

They seem perfectly happy continuing to rack up the miles year-round for now, with one major milestone both of them are eagerly awaiting.

“We’re looking forward to the grandkids being old enough to travel with us.” 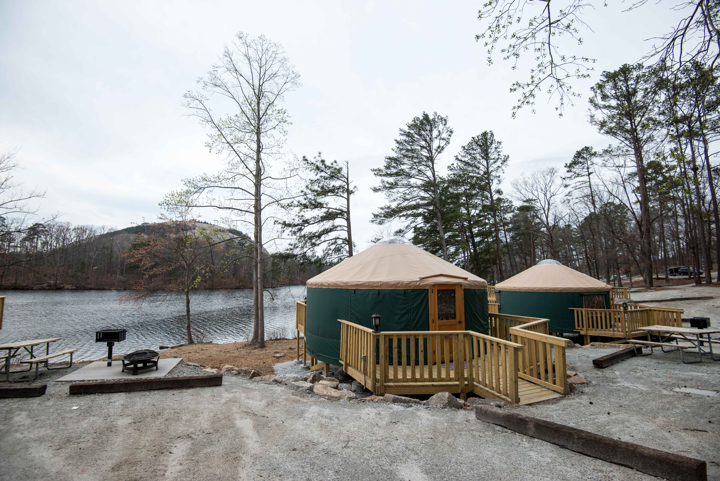