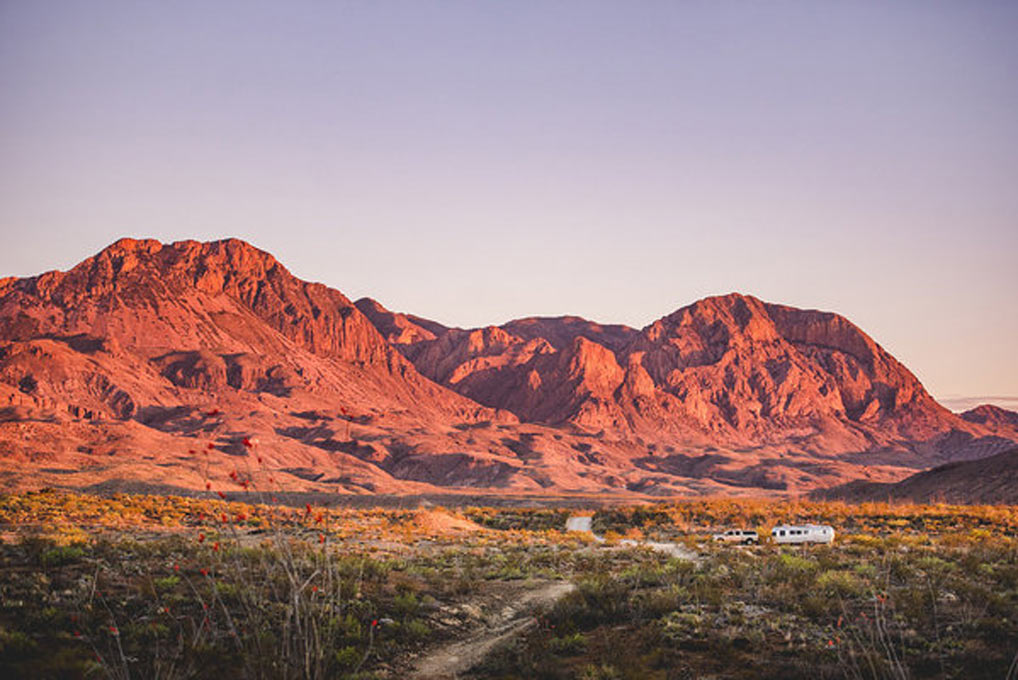 The Big Bend of West Texas is the crown atop the jewel of the Lone Star State, or perhaps more aptly put, the patina on the barrel of one gorgeous antique pistol.

At first glance, the barren rocky desert facade that is this entire region plays tricks on your eyes, rolling hills seem immensely vast while distant mountain peak landmarks prove dubiously unreachable. Hours spent driving seem to leave you relatively close to where you began, and evenings go by as slowly as an armadillo waltz. Then you take notice. The ocotillos grow fuzzy green jackets in the weeks leading up to their fire red bloom. If you’re lucky, wildflowers erupt after a heavy spring rain and suddenly the few paved roads you can find are wearing blue bonnet eyeliner, every shade of the rainbow filling in the desert’s cracks and popping from the prickly pears like a freight train’s worth of paint crashed all across the Big Bend. When autumn rolls around, the flowers give way to a barrage of golden glowing cottonwood trees, thick and rustling in a well deserved seasonal breeze. In the winter months, we’ve even seen the entire desert freeze over, cactus sparkling like barbed wire popsicles as far as the eye can see.

It’s a place to find yourself alone if you’d like, with nothing more than the turkey vultures and roadrunners to cross your path, should you so choose. It’s a place out of time and a place to be respected and reckoned with, and for those who make the out of your way to anywhere journey, there’s plenty to explore.

If being in the actual national park is your goal, and if you’re looking for something with a more formal campground vibe (think spots adorned with a picnic table and a campfire ring, typically some trees for shade, and big sweeping views), the National Park Service operates three campgrounds with such flair.

Chisos Basin Campground is the oft-coveted campground suitable for smaller trailers and tent camping, which has the arguably more spectacular immediate scenery of the official campgrounds in the park, and places you at the base of the popular big payoff Window Trail hike. Expect a temperature drop when the sun does its behind the mountains dance and stay hydrated, particularly in the summer.

Cottonwood Campground puts you closer to the southwestern border of the park, Texas and the United States, near the visually jaw breaking Santa Elena Canyon. Finally, Rio Grande Village places near the border on the eastern side of the park. Not to be confused with the concession-operated, similarly named, full-hookups park right next door, Rio Grande Village RV Campground, this park places you at the foot of a short hike to some stunning views of vast swaths of the park, perfect for sunset viewing, and a short drive to a small convenience store or Boquillas Canyon, where you can watch donkeys cross the Rio Grande without need of a passport and their owners living the Mexican life on the southern bank of the river.

While it’s not free, as you need to pay for a permit, there is some spectacular backcountry camping to be had in the park that is accessible to many vans, truck campers and in some cases, RVs and trailers.

There are several of these sites scattered throughout the park, and you can inquire at the ranger stations as to which are available and which might be most suitable for your particular setup. Here is a sampling:

“What’s the difference between the state park and the national one?”

“The state park is better.”

It’s true. The state park is more accessible, it’s more colorful, the hikes are more laid back and the distances from one thing to the next not as, well, distanced. Plus, the River Road, which goes from one end of the park to the other, following the Rio Grande from various elevations above and alongside it, is easily one of the greatest drives in the entire United States.

The state park offers a variety of places you can camp in an RV, for around $8 per night (but you’ll need a Texas State Parks pass to wave the day use fees). Inquire at the ranger station as to which might be best suited for your particular rig and recreational pursuits, but all of them that we’ve seen and stayed in have been secluded, scenic spots relatively close to the river.

If you’re after something with a little more civilization involved, well, we should note that you’re not going to find a whole lot of that in this region. However, just because you want to find a little isolation in Texas’ most mysterious and stunning region doesn’t mean you can’t have access to full hookups, a grocery store and a roadhouse or two.

Outside of the park, near the town of Terlingua–made famous by an international chili competition formerly backed by Willie Nelson and the Jerry Jeff Walker record of the same name–you can engulf yourself in perhaps some of the wildest characters to visit the story of your life.

Don’t expect a pool or some guy in a golf cart to come by and help you back in–or even hot showers and WiFi for that matter–but if you just need a plug, a little cell service, and a short walk to towns full of a whole lot of rocking chair afternoons, these places may deserve at least a tip of your hat.

So you’re barreling down these old Texas Farm to Market Roads in your Class A, smoking a cigar with your bulldog riding shotgun, and just have to have that 50amp, full hookup, cable TV connection spot. Where does the modern glamper go to find the best of both worlds down in the Big Bend?

It’s a new world, and these days you don’t have to rely on solar power and a ham radio to stay connected while in the region. Maverick Ranch RV Park is located in the restored town of Lajitas–a golf course, bar and shopping district east of Terlingua–and offers everything from WiFi to a little cell reception, a swimming pool and laundromat.

If proximity is of no concern, you could also look into the similarly equipped Marathon Motel and RV Park (about an hour and a half from the edge of the park), in the quaint little village of Marathon, Texas.

Finally, this sweet little gem of a cactus pear way off the beaten path–even for Big Bend–is sure to make any a camper who’s looking for seclusion yet amenities happy.

Chinati Hot Springs has a few cabins alongside a cottonwood-lined river wash that offers camping for small vehicles. The road in? Long, and absolutely treacherous given the amount of bumps and washboard grooves. Totally worth it though. Make sure you bring absolutely everything you need, because there is little in the way of service at the campground…except for some amazingly pristine hot springs, a pool, some gorgeous desert hiking, a small kitchen for public use, and your best bet at ever finding true peace of mind.

If you’ve done the parks, are played out on the small towns, but still love the dark skies and exotic living this region has to offer, Chinati Hot Springs is our go to spot for feeling like we’ve scored the best deal in Texas.